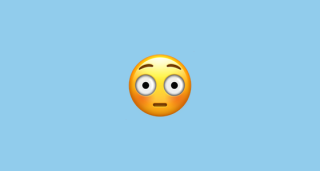 A few weeks ago, I couldn’t sleep. So I lay in the dark and started vanity googling myself. Now you know that I do this. I find looking at the search results for “lily cho” to be sort of vaguely interesting (how the internet sees me is not how I see me) and, mostly, stultifyingly boring. Usually, after a minutes, my eyelids are drooping (or I realize that I should just get up and make some toast).

But this latest search, in all its algorithmic idiosyncracy, turned up something I hadn’t seen before: an essay of mine published (re-published actually) in a book I did not know about. In Postcolonial Studies: An Anthology (Wiley-Blackwell, 2015), you will find my essay, “Asian Canadian Futures: Diasporic Passages and the Routes of Indenture.” This essaywas first published in Canadian Literature 199 (2008), a special issue on Asian Canadian Studies.

I blinked and thought, at first, wow, how unbelievably cool to be anthologized with so many of my postcolonial theory heroes. There I am, listed in the same table of contents as Edward Said and Gayatri Spivak (indulge me for a moment and let me be thrilled to the gills)! And then I thought, how did I miss this? I am very bad at keeping track of my own publications but this seemed like kind of a big thing to miss. But I do tend to read publishing agreements a little too quickly. I decided that I would look up the publishing agreement in the morning. It was late. I had probably just forgotten ever having any kind of conversation about this book.

I went through my inbox the next day and looked and couldn’t find anything. Of course, my inbox is messy and it was possible that there was something buried in there but I couldn’t find it even though I really tried. But I was already beginning to suspect that something kinda funny was going on. I wrote to the tirelessly awesome editor of Canadian Literature and asked if, when she had a moment, she could please poke around the journal’s files to see if anything was there. I also wrote to the editor of the anthology. I wanted to tell him how thrilled I was to be a part of the anthology and to ask if, ummm, he and I had talked about it and I had just forgotten?

The editor of the anthology wrote back right away to tell me that he agreed to edit the anthology on the condition that the publisher handle all the copyright and permissions. Fair enough. He is super lovely and we are now chatting about our projects and I am delighted to have had this chance to talk to him.

In the meantime, I told this story in a funny-ha-ha way to a friend, another postcolonialist, who wrote me right back and told me that this very thing, with this very publisher, had happened to him in 2004.

So what happened? A major international publisher invites an authority in the field to edit an anthology. This editor is brilliant (not least because he chose to include my essay!) and, rightfully, wants to focus his energies on editing and not managing the permissions process. The publisher was supposed to take care of this work. And yet, somehow, somewhere along the line, no one asked me for permission to use my essay. The anthology will be sold mainly in order to profit the publisher. And I get the genuine thrill of being in such serious company, but also a lingering sense of puzzlement about how this can happen and whether it really matters.

I also know that the process is not supposed to engender this kind of puzzlement. It’s not the first time that an essay of mine was republished. I am so proud and so completely ecstatic to be included in Roland Colama and Gordon Pon’s Asian Canadian Studies Reader (UTP, 2017). Another essay will be in the The Routledge Diaspora Studies Reader. In each of these cases, I have a clear file of correspondence where permissions were negotiated. In the case of the Routledge book, I didn’t even own the copyright but was looped into the conversation anyway.

It might be that permissions had been obtained and I have somehow missed it. Maybe all this happened between the Wiley-Blackwell and Canadian Literature. But I have a sinking feeling about that hope.

I’m so pleased and humbled to see that my work is circulating, that it is in such amazing company, and that it might help future readers sort through complex fields of study. But this experience of puzzlement leaves me with a lot of questions too. Of course, I benefit from being a part of these anthology projects. Of course, I also hope that these books will help future readers. When I was studying for my comps, anthologies like these were so useful for helping me to map the field, and for getting a sense of general trends and trajectories. But I also can’t help wondering  about a publication process where copyright and permissions are seemingly not relevant even though the finished product is not open access, not cheap, and, financially, benefits only the publisher. This experience of being unwittingly anthologized seems to be another potential part of our on-going conversations on the increasing enclosure of the intellectual commons by a handful of powerful international publishers. Or am I missing something here?

Update: This post has only been live for a few hours but I’ve already heard a lot of stories from other folks who have had this happen to them. I would love to hear more in order to write a post to follow up on this one. I promise to be discreet and respect your privacy. If my experience here is not unique, I think it’s important for us to track what’s happening and to think collectively about what to do. If you have had a similar experience and want to share please do drop me a line either in the comments or via lilycho [at] yorku [dot] ca.

Second update: Canadian Literature had a chance to check their records and it looks like they did give Wiley permission to re-publish my essay. Until now, it has not been the journal’s policy to inform the author when permission to reprint their essays are granted. Canadian Literature will be looking into changing this practice. So this is ALL good news. But the fact remains that, until we get a better system of permission in place, we will all be reduced to vanity googling in order to keep track of the circulation of our own work.

The windchill this week has been hovering around -35 C on average. People from other, warmer places, have been asking “Ok, but what’s the real temperature? The one on the actual thermometer?” To which, honestly, I have been letting my inner bitch respond along the lines of “Why? ‘Cause you want to make a statistic? The windchill *is* the real temperature. It shows that, upon exposure, your skin freezes in the same amount of time it would if in an environment with -35C temperature on the ‘actual thermometer’, but without any wind or humidity.” Yeah, I’m not that proud of myself, either.

However, the irony is my craving to spend time outside. Maybe it’s the forbidden fruit. Maybe I’ve lost all maturity. Maybe [gasp] I’m starting to like Edmonton winters. You know, even with the abysmal temperatures, which, truth be told, only happen on a handful of days (ok, maybe two handfuls; three, if it’s a really bad winter), when the sun is shining, life is good. When the sun’s not shining? Well, why don’t we leave that topic for a summer day, ok?

The trick is, from I’ve been told and been able to ascertain myself, to get out often. In two ways: get out of the house and get out of town. While the latter might be a luxury, the former really holds the secret. Get out of the house. Properly dressed, of course. When you think you’ve put on enough clothes, put one more layer, and take an extra pair of mitts in your pockets. Take that touque, too, it’s on the house. 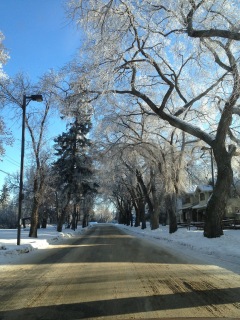 Edmonton on a crisp sunny day in January
Why am I rambling on and on about the winter in Edmonton? I guess because enjoying winter in Edmonton is yet another version of making lemonade. (no, no, no, it’s totally not because I’m obsessed with getting away from #yeg #winter). Winter, even of the bitterly cold variety, is still enjoyable when you have a good SAD lamp the time and the opportunity to get outside as much as possible. I envy people who ski, and I promise to turn that negative emotion into lemonade, by learning how to ski myself. Soon. Maybe next year when, you know, both kids would be able to stand on skis. And then I’ll just envy them for picking it up in no time, while I waddle along, and take a gazillion falls.
What’s your version of middle-of-the-winter lemonade?
I’ll be honest: I’m on a short break right now between end of classes and exams and all I want to do is relax. Fast Feminism. Slow Academe? Try, Fast Nothing. Slow Liz.
So, when I sat down to write this post, the only thing that I felt like sharing was Ikea Monkey.
Ikea Monkey has been bringing a smile to my face. And I’m not the only one. Ikea Monkey has gone viral, at least in Toronto. I’ve talked about IM with multiple people and overheard others in restaurants discussing IM, which has become an Internet meme.
Anyway, (and here comes my somewhat tenuous connection to Hook and Eye content), it’s got me thinking about what kinds of stories and ideas get picked up and circulated—the stories that spark something, that make people want to talk about them and share with others.
When I’ve taught a class and I can hear my students still talking about a particular topic as they’re leaving, I feel that I’ve done a good job as an instructor. I want to have Ikea Monkey moments in my classes.
Most of the teaching advice I’ve been given, when it comes to lecturing, centers around this basic principle: if you just try to get one or two key ideas across in a class, it’s much more likely that those one or two key ideas will stick with students.
So, I ask you, readers, now that we’re reaching the end of a semester: what are the most important things you want to achieve by the end of a course (either as an instructor or as a student)? Does it relate to course content, a style of thinking, or a set of theoretical concepts? Looking back on courses that you have taught or taken, what has stuck with you? Have you ever taught or taken courses with unexpected learning outcomes? Can we “meme” our students?