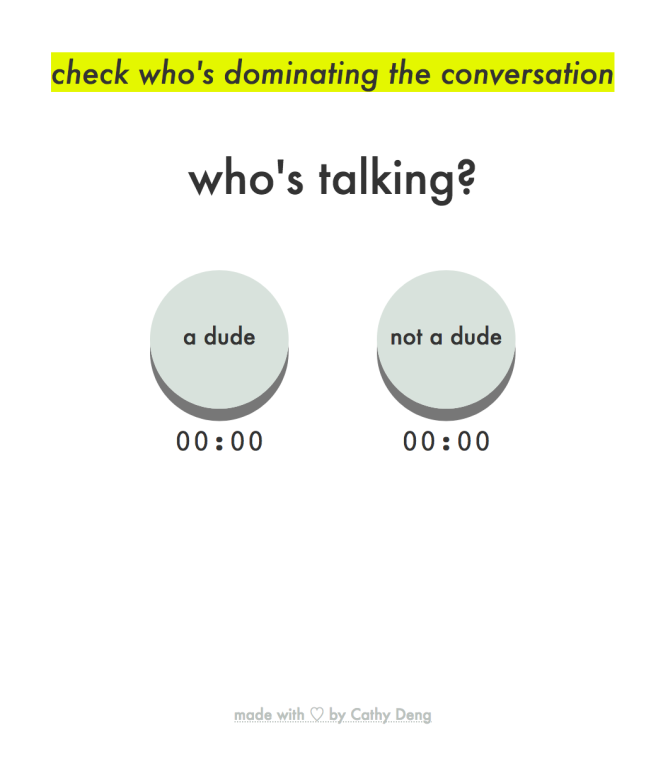 It’s been a rough week for feminism. Maybe you found yourself in tears on the bus or the train on the way to work. Maybe you thought about how much it cost for one woman to stand up and say something true and how that courage was mowed over by by belligerence and cowardice. Maybe you are mad all over again and again and again. Maybe things keep happening that push too many buttons.

It’s been that way for me.

Time to take back some control of this whole button-pushing business.

Time to go back to Cathy Deng’s brilliantly simple question: is a dude talking?

Go here and starting tallying: are men talking too much?

I’ve been in a lot of meetings lately. Probably you have too. And have you noticed who’s been doing a lot of the talking? You guessed it. In every kind of meeting — one-on-one in my office, small committee, large committee, massive faculty council and senate meetings — I couldn’t help noticing that one kind of voice kept dominating the floor. The two exceptions, for me, were the meetings I chaired.

Maybe it’s too simple to break things down along a binary of whether or not a dude is talking. What, after all, about race, class, sexual orientation, and ability? Good question. In the spirit of evidence-based inquiry, bear with me (and Deng), let’s just try to measure the dude vs. not dude thing. Just for a few weeks. Or even just one week. Tell me what you find.

Really, do tell me. In the comments below or, if you prefer, via email at lilycho [at] yorku [dot] ca. I’ll tally and report back.

And do submit your results to the on-going Gender Avenger tally.