Melissa’s post (yay! Melissa!) last week made me think about babies and work and, specifically, a very clear moment when I realized that there was no “good time” to have a baby.

First, let me say that I don’t mean to imply that any one, or you or me specifically, should have a baby. That is a different, and also very personal question. Maybe the best answer to that so far is in this excellent Dear Sugar column, “The Ghost Ship That Didn’t Carry Us,” which I still re-read every once in a while because I love what she says, and I want to remember that I need to salute the sister life that I did not choose, the one where maybe I didn’t become a mother, and know that this other life is also important and beautiful.

Hello there, other life! You rock! Sending you love!

But, in this life, I get to do work that I love and also have this totally awesome kid who has completely redefined the whole idea of love for me. For me, there is this whole universe of love I didn’t know about and then, poof, there it was in this tidy 6.9 pound package of non-stop sweetness.

I didn’t know that I wanted a baby. I was not one of those people who “just knew.” Even especially at the moment when I was about to give birth, I was really not convinced that this whole having-a-baby thing was such a good idea.

I did know, and I had known for quite a while, that there didn’t ever seem to be a good time to have a baby. This realization hit me on New Year’s Eve some time during the end of grad school. I was  in LA and had just broken up with a boyfriend who lived there, and my beloved friend Emily told me that I could join her in San Francisco where she would be meeting up with her girlfriend. I was sad and lonely and I will never forget the generosity of these two great people letting me crash their romantic getaway so that I would not have to bring in the new year being sad and lonely (which, sadly, I did anyways but I have only myself to blame). Anyways, the three of us were having dinner somewhere cool. It was a place where there were lots of fancy cocktails and no kids. And we somehow got to talking about when, if we wanted to do it, we would have children. This was a purely hypothetical conversation. Emily was in law school. I was finishing my dissertation. We had no intention of actually doing anything about this baby thing any time soon. It was just a conversation about what might be good time for that to happen, if it was ever going to happen.

Emily and I have been friends since high school so I would sometimes have these kinds of “life-plan” conversations with her. The hubris of these conversations are now amusing. The conversation went something like this:

Me: Well, even if I did find someone to have a baby with me, I can’t do it until I finish my diss.

Em: No, that doesn’t make sense.

Me: If I got a postdoc, that would not be a good time. I probably wouldn’t even be in Canada since I want to do my postdoc in the states.

Em: Nope, that would definitely be a bad time.

Me: And if I got a job after the postdoc, that would be the worst time because I’ll have to work my butt off to get tenure.

Em: Nope, I guess you definitely can’t have a baby then.

Me: So, maybe after tenure…

Here, I stop to count how old I would be then. And then I stop and realize that I would be old (sorry, current self, but the person I am now seems totally old to that girl who sat around in that cool restaurant in SF back then). Em, her girlfriend, and I look at each other, blinked, shrugged our shoulders and said to each other, I guess there’s no good time! I remember this didn’t seem all that terrible to me. I just thought that it was a puzzle and I hadn’t figured it out yet. Like, there was some secret code and, once I was in the right place in my life, someone would give it to me and it would all work itself out.

In my late-twenties and thirties, I had boyfriends, I lost boyfriends, I found new boyfriends. The baby question seemed even more impossible. I mean, it was hard enough to just figure out if these relationships would still be a thing in my life from one month to the next. One of my long-term boyfriends told me that dates with women in their thirties were like “husband interviews.” Since we had made it past those early dates where I (maybe?) played it cool, I gathered that it was desirable to never treat any date like a potential husband interview. So any question about any future beyond what band we should get tickets to see, or what restaurant we should go to, or what cool trip we should take, was off the table. At the time, I didn’t know that I necessarily wanted to be married, or have a baby, so this all seemed fair enough. Or, as Jess Zimmerman put it so beautifully in “Hunger makes me,” it was too hard to even acknowledge that there were things I could want. Now, I see the imbalance of a relationship where one person declares talk of real futures super-uncool and the other then just suppresses any thought of such futures.

All through this time of forestalling futures I didn’t know I could want, I kept seeing news articles about the precipitous drop in fertility that women experience after a certain age. I became really angry about such news items and was secretly convinced that they were part of an anti-feminist conspiracy anxious to get women out of their jobs and back in the home making babies. It seemed to me that it was no accident that there were suddenly so many of these articles everywhere at precisely the same historical moment (in the first world) when more and more women had decided to put off marriage and babies in the interest of being rock stars at their jobs.

But I was secretly also a little anxious. I felt like I had done something wrong, like I had planned badly, like I had somehow failed. And I still really truly wasn’t even sure that I wanted to have a baby.

Fast forward and I meet this amazing person and he is fabulous in every possible way and now we are parents and it is amazing and fabulous. Still, when I was pregnant, I learned that mine was technically considered a “geriatric pregnancy” and that I was of “advanced maternal age” because I was older than 35. I was directed to genetic counseling that, because I was not prepared for it, left me feeling like big jerk for trying to have a baby as an old lady and thus subjecting my poor unborn child to elevated risks for all kinds of bad things. I’m sure that was not the intention but that was the effect on me and I felt awful about it.

There wasn’t any plan. I did end up getting tenure before I had a baby. I did end up getting a job in the same city where my husband lives. Even though I didn’t get pregnant at the exact moment when I decided I wanted to have a baby, it did happen. And those first years of being in a job and being a mother were bananas and bananas-exhausting. How we laugh now when people who don’t have children tell us that they are “so busy.” Mostly though, nothing bad happened. It was all fine. I couldn’t have known any of that then.

Here’s the thing. I keep referring to a “good time” to have a baby as though such a thing existed. That was and is a fantasy. Not least because you can only plan so much. Becoming a parent taught me humility in nine thousand different ways, but one of them involved learning that parenting is about surrendering a lot agency about timing because your kid will have their own ideas about when it will be a “good time” to do anything — that includes everything from putting on snow pants to when they will emerge into the world.

I probably don’t need to rehearse the somewhat depressing stats on the “motherhood penalty,” or why women who have children generally take more hits in their career trajectory than men. This graph sums up some of the latest research (yep, it deserves a whole special post of its own): 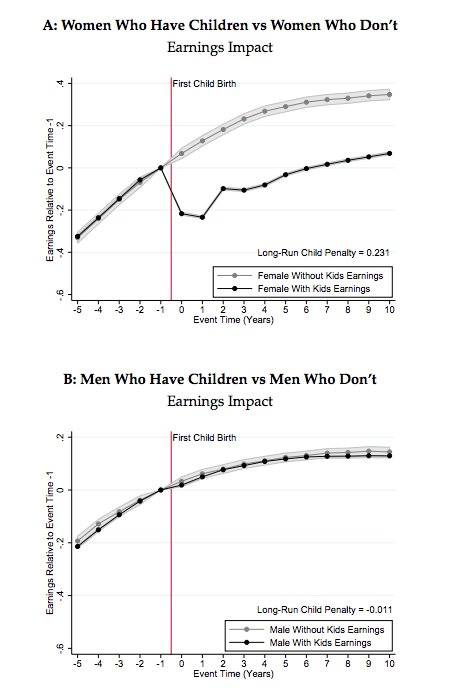 It is now widely recognized that “family formation negatively affects women’s—but not men’s—academic careers. For men, having children can be a slight career advantage and, for women, it is often a career killer” and “that men with young children are 35 percent more likely to get tenure-track jobs and 20 percent more likely to earn tenure than women in the same boat.” On top of all that, this penalty can begin even before there is a baby in what Jessica Winegar calls the “miscarriage penalty.”

For these women, there was no good time.

But, to be honest, I don’t think there is a good time for anyone. I know that this can sound like a useless platitude and there are others who offer more concrete advice. It leans towards the idea that the ideal time might be when you are in grad school. I can see that argument but I can say that it would not have worked for me.

It will never be a good time AND, if this is the sister life you choose, it is always the right time. I know that my younger self would find this frustrating. I wish I could tell her, and you, that there is a secret code, a magical time, when it will all be perfect and easy. But she (and you) would see right through me and call me out on that anyways.

Looking back, I will say that I wish I had been able to talk more honestly and more openly about this question — even just with myself.

Whatever happens, whatever you decide or have decided, let’s keep standing tall and saluting these great feminist lives that we are making.

Hello there, other life! You rock! Sending you love!