The semester began with the shadow of a threat. Under the username “Kill Feminists,” comments were made on a blogTO comments thread (now deleted), and captured by a reddit forum.

The University of Toronto notified the university community of the threat via email on September 10, 2015. This response has been criticizedfor its lack of specificity. On September 11, 2015, the Toronto Police announced that the threats were not credible. The investigation is ongoing.

Do my feminist friends and colleagues at the U of T feel better about going to work now? Does a discredited threat neutralize the bad affects of the threat itself?
I’ve been thinking about these questions and about the shadows that fell on my first September as a professor way back in 2004. It was my first real job and I felt enormously lucky and privileged to have it. I still do. One of my courses was a large lecture course. There were about 150 students enrolled in it. To be honest, the whole thing was terrifying. I had all the usual fears about screwing up. As everyone who has ever been in front of a classroom will recognize, teaching, in the best of circumstances, is its own exercise in vulnerability.  It was, after all, just me up there. But then the terror ramped up to a whole new level.
I started receiving emails sent from an anonymous hotmail account. The writer identified himself as a student in my class. He told me that he knew where I lived, where I bought groceries, the route I took to get to campus. He said other things but I don’t remember them anymore. I think I tried to forget them. I only remember being scared.
Suddenly, things that seemed awesome were actually awful: I lived alone; I rode my bike to work; I was starting a new job in a new city where I didn’t know really anyone; I had my phone hooked up (remember when we all had land lines?) and was fine with having my phone number (and thus my home address) published in the phone book; I had just moved into the cutest little house and had the security system dismantled because I didn’t want to feel like a prisoner in my own house; I went to the grocery store all the time.

I took these emails to the chair of my department who told me to take them to campus security. We never talked about this issue again. I wonder now if I really seemed that brave to him? I must have because he certainly never followed up. And I didn’t want to be the new girl making trouble and not getting along in her new courses.
I went to campus security. They told me that the only way to do anything about these emails was to report them to the police and to open an investigation. I don’t remember precisely how this conversation went, but I remember feeling as though it would be such a huge drag to go to the police. That it probably wouldn’t be worth my time. Or that tracking this guy down was such a huge, insurmountable problem. I don’t believe that this is what campus security necessarily meant for me to think, but the result of that conversation really was that

I left knowing that they could not help me.
I called the phone company and told them that I no longer wanted my number to be public. I was mad that I would have to pay $4.95 a month for that privilege.
I considered doing other things, but they felt futile and silly. And that was a big problem. I felt dumb for even feeling scared. The whole thing felt weirdly embarrassing. I’m pretty sure that, aside from the department chair and campus security, I didn’t talk about these emails with anyone else.
The worst part was walking into that lecture hall twice a week, looking out at the sea of faces, and knowing that someone out there was going to leave class and send me another abhorrent email.

It was just me up there.
I would like to say that there was some kind of lightening clear resolution. But there wasn’t. I kept showing up. I kept trying not to be scared. One day, the emails stopped.
But it took me a long time to stop feeling vulnerable. I still do sometimes. A lot of the time. Over the years, things like this still happen once in a while. I used to keep it all in a file somewhere and then I stopped because it felt like weight that I no longer wanted to carry.
It was just me up there.
And I’m sure I am not alone in this.
The problem with threats is that they remain threatening long after other people tell us that we don’t have to be scared. They cast a long shadow. They leave us feeling vulnerable long after they have been declared to be nothing more than shadows.
So, what do we do with these vulnerabilities? 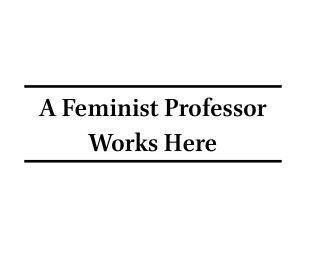 We keep showing up. We find solidarities.

We remember that it is okay to not be okay.
Or, as Sara Ahmed tells us about feminist hurt, “We are not over it; it is not over.”
Meditating on where we can go when the hurt is not over, Ahmed reminds us that the response to repugnant acts is not to stifle the suffering. “We might need to attend to bad feelings not in order to overcome them, but to learn by how we are affected by what comes near, which means achieving a different relationship to all our wanted and unwanted feelings as a political as well as life resource.”
I don’t want to feel vulnerable. But, as Wendy Chun reminds us, “we’re most vulnerable because we think we’re safe.” Chun refers to how the internet can become a series of gated communities where portals enclose us in seemingly private spaces. As Chun noted in her ACCUTE keynote address this past May, we shouldn’t conflateprivacy with security. I have no desire to live in a home where the window screens are outfitted with trip wires, and where the house keys are attached to a “panic button” that I am encouraged to keep next to the bed. That is also not how I want to live on-line, and not how I want to feel on campus.

I don’t want to feel vulnerable, but I also don’t want to be locked down against students, against the possibilities that feminist hurt allows. I’m not kidding myself. This is not a good place. Wouldn’t it be nice if it were not the case that the histories that bring us to feminism are often histories that leave us fragile? But it is the place where we are and we are going to make something good out of these vulnerabilities. It is okay and not okay.