Over here at Hook & Eye, we have never shied away from that which may be considered frivolous. We understand that figuring out your hairhas a lot to do with figuring out your life, which has a lot to do with figuring out your job. We have covered the importance of the go-to (as opposed to go-go) boots. We have discussed the politics of eyewear. Most recently, there was Aimée’s completely spot-on piece about the power of the blazer. Following in this august H&E tradition, today I would like to take a moment to think about the kind of space you might fantasize about working in.
Let me begin with a space of fantasy tucked neatly into Terry Eagleton’s recently much circulated piece on the slow death of the university. Somewhere in the midst of his trenchant discussion of philistine university administrators and the rise of the entrepreneurial university, there was this astonishing (to me) revelation:
There had been a time earlier when college tutors might not even have bothered to arrange set tutorial times for their undergraduates. Instead, the undergraduate would simply drop round to their rooms when the spirit moved him for a glass of sherry and a civilized chat about Jane Austen or the function of the pancreas.
Forge the part about not scheduling tutorials (as the Undergraduate Program Director for my department, this idea makes my tummy do backflips in the most unpleasant ways). What about the part where he refers to the college tutor’s rooms? As in, an office that has more than one room? (I hear from those of you who have been through the Oxbridge that such rooms really do exist and that they really are full of nobly tattered Persian rugs and silver tea services so I realize that this is a fantasy space that actually exists, but just indulge me as I persist with my incredulity.) Okay, and then there’s the part about the glass of sherry. I tried to imagine a world where I would work in the kind of office where anybody who came to my office, least of all one of my undergraduates, would be offered a glass of sherry.
Even if I was allowed to serve alcohol to my students – and I’m pretty sure I’m not – who would provide the sherry? Would it be in a decanter? Who is going to wash the glasses afterwards? I have trouble picturing any Oxford don trundling down the hall to rinse out the sherry glasses in the bathroom. Maybe you can’t have sherry unless you also have a porter?
These questions remind of another representation of a fantasy academic office space that has stayed with me. Donna Tartt’s The Secret Historygives us the delicious idea of the office not only as a fantasy, but also a secret fantasy:
Julian answered the door… by opening it only a crack and looking through it warily, as if there were something wonderful in his office that needed guarding, something he was careful not everyone should see. (32)
And when we are finally permitted entry, it is abundantly clear that some secrets are worth keeping:
It was a beautiful room, not an office at all, and much bigger than it looked from outside – airy and white, with a high ceiling and a breeze fluttering in the starched curtains. In the corner, near a low bookshelf, was a big round table littered with teapots and Greek books, and there were flowers everywhere, roses and carnations and anemones, on his desk, on the table, in the windowsills. The roses were especially fragrant; their smell hung rich and heavy in the air, mingled with the smell of bergamot, and black China tea, and a faint inky scent of camphor. Breathing deep, I felt intoxicated. Everywhere I looked was something beautiful – Oriental rugs, porcelains, tiny paintings like jewels – a dazzle of fractured color that struck me as if I had stepped into one of those little Byzantine churches that are so plain on the outside; inside, the most paradisal painted eggshell of gilt and tesserae. (33)
Did you read that and call to mind your own office? If it looks like Julian Morrow’s, I’m very pleased for you. Maybe, though, if you are a Canadian academic and you are lucky enough to be in a TT job, your campus office might look something like mine (you can’t see but there is a cactus just outside of the frame so I am not entirely without greenery):

Don’t get me wrong. I like my office. I really do. I have windows! And, depending on the time of day and the light, a great view into random student dorm rooms. It is obviously my own fault that this space is not filled with flowers, porcelain, and the scent of bergamot and camphor.
I’ve been thinking about this partly because I realized that, perhaps like many of you, I think of my campus office as the place where I meet with students and do admin stuff. I might even do some marking here although even that I am more likely to do off-campus. I don’t think of it as the place where I will write (although this blog post is being written in this very office right now!).
When I think of a fantasy writing space (and yes, this is also a space of fantasy for me which tells you that I really am no good on the interior design front), it looks a lot more like… 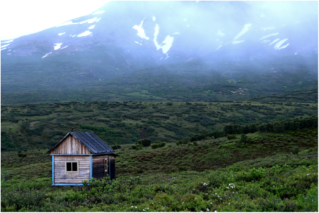 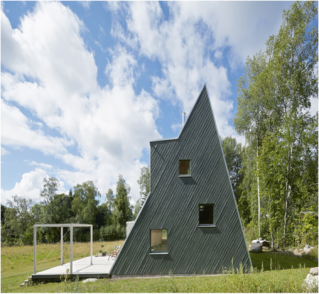 Of course, in my head, all of these spaces are accompanied by a hunky barista who makes perfect cortados on demand.
Barista aside, I am struck by how my fantasy of a good place to write is one that is very private, and magically isolated. It seems that I think that I need to be somehow cut off from the world in order to write. More precisely, I don’t see any students or colleagues in this picture. Unlike the office in Eagleton’s piece, or Julian Morrows’ fictional office in Tartt’s novel, these are not spaces where one thinks and works and encounters the occasional student or colleague. I don’t know how my idea of the space of teaching and the space of writing became so bifurcated, but it did.
Is it that way for you?
What might it mean for my teaching and my research if I brought those spaces more closely together? I ask this question even though I am nowhere near being able to write an essay in my campus office.
Once upon a time, in a university where I may or may not have worked, there may or may not have been a dean in the general field of the liberal arts and humanities (this is, I suspect, less of an issue for folks who run labs) who thought that faculty members should, like everyone else in the working world, identify the two weeks of the year in which they planned to take their allotted vacation, and then be present in their campus offices, with their office doors open, the rest of the year. It was not an idea that was embraced. And, at the time, I may or may not have thought that this idea showed little sympathy for the way in which most of us conduct our research and writing, but also verged on being anti-intellectual. But I can see the point of trying to make our research more visible not only in terms of its intended outcomes (brilliant publications that are widely cited and transform the field of knowledge, no pressure folks) but also in terms of the work we do to get there.
Of course, it is no accident that the college tutor’s room in Eagleton’s essay is a placeholder for an academic way of life that is increasingly rare in the age of austerity. Even though I am no fan of the university’s turn to corporatization and entrepreneurialism, I also do not want to be nostalgic for a university structure (which allowed for offices with multiple rooms and porters that might magically whisk away the sherry glasses and tea service) that was much, much more exclusive. As Aimée has already written, making the office space a writing space has a lot to with not feeling as though it is just where I hide when I am bouncing from obligation to obligation. Maybe it is about getting a bean bag chair. Maybe it’s time I brought some flowers to the office.
Works Cited
Eagleton, Terry. “The Slow Death of the University.” The Chronicle of Higher Education 23 April 2015.
Tartt, Donna. The Secret History. New York, NY: Alfred A. Knopf, 1992