On Sundays at 5:00 pm, I stop being Melissa and I become Dayanara. I’m a regular ol’ alt-academic from freezing Toronto who loves running and reading with a cat in her lap. Dayanara is the eldest daughter of an oasis-tribe chieftain in the deserts of Drujenna, her main job is international diplomacy and avoiding being kidnapped by bandits, and she wields a mean oaken staff. We don’t have much in common but our shared affection for caffeine and nice shoes, and that’s a big part of the reason why I love being her for a few hours every week.

Dayanara runs around with a pretty motley crew. There’s Owen, the burly enforcer with a usefully enhanced tolerance for pain (who is, amusingly, my gentle husband by day); Clodhopper, the inept keeper of the caravan’s inventories with a fondness for silly shoes; Lysander, the explorer and swordsman; Quisentus, his trusty sidekick of many hidden talents; Liesl, the not-terribly-perceptive tracker; and a host of other minor characters who appear and disappear as needed. And, of course, there’s the gamesmaster, who has ultimate say over the shape of our story and how our characters deploy their skills, talents, and possessions within the bounds of the story. At present, Dayanara has just worked with Lysander and the others to defeat a marauding group of banditti and is working, across a difficult language barrier, to communicate to these caravan-bound weirds what exactly she’s doing out in the desert.

When the six of us sit around my dining room table on Sunday night, if an outside observer were to ignore the dice and GURPS books everywhere, the scene might look not unlike any meeting that happens in or out of academia. There’s a lot of talk about what our goals and aims are, and what we can do to best achieve them. There’s a lot of compromise, either mandated by the role of the dice when you don’t have enough points to accomplish what you want to, or required by the gamesmaster, who places limits on what we can or cannot do in order to move the story in the right direction. There’s a “yes and” spirit not unlike in improv, where we all have to pay attention to what everyone else is doing and then try to move things forward by using their actions as a launching pad. And there’s a ton of collaboration, because most of the time all of our characters are doing something together, whether it’s talking, fighting, or strategizing, and we naturally understand that we’re more effective when we work in tandem.

It’s going to seem like I’m going off on a tangent here, but I assure you that I’m not. The American Historical Association and the Scholarly Communications Initiative have both done work in the last few years to identify the essential skills that PhDs should possess in order to succeed careers in and out of academia. The results of AHA focus group studies with with potential employers, university faculty and administration, and PhDs beyond the academy was a list of four key skills:

In surveys conducted with the employers of people with PhDs, the SCI aimed to identify what skills and experience PhDs were missing when they made the transition into a non-academic workplace. The overlaps with the AHA findings were significant: 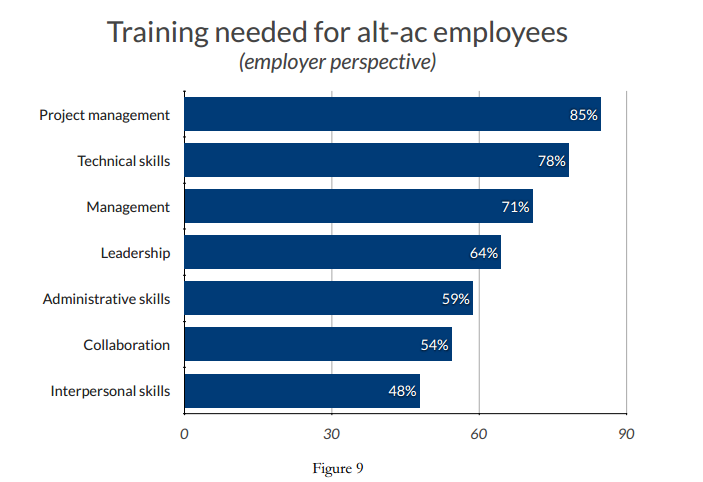 But perhaps even more interesting were the skills that PhDs believed they gained in grad school, and the places where there was a serious mismatch between the training needed, and the skills acquired: 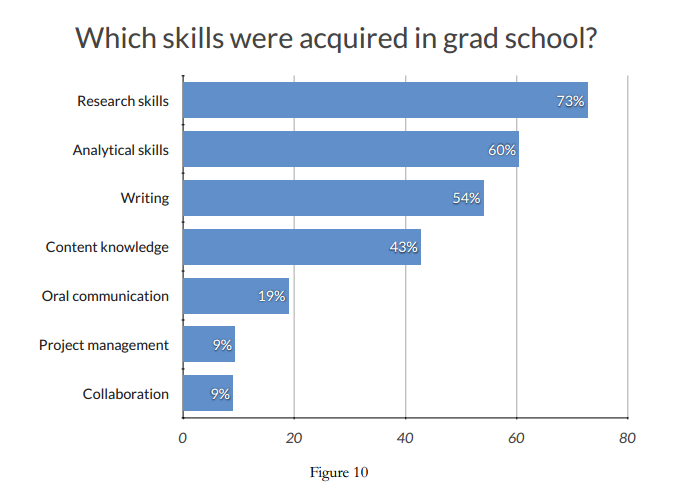 Doing a PhD, it seems, isn’t very good at teaching us how to collaborate–although it does seem to do a better job than PhDs think it does, based on the fact that only 54% of employers believed that their PhD-holding employees needed collaboration training, while 91% of PhD graduates believed they were lacking it. But do you know what is good at teaching collaboration and interpersonal skills? You guessed it–role-playing games.

This is not to say that RPGs could or should become part of the PhD curriculum anytime soon, but just as there can be value in creating a shadow resume of work that doesn’t make it onto the C.V. but help develop employment experiences and skills, there can be value in creating a section of the shadow resume devoted to extracurricular activities that likewise help to develop those skills. I’ve been in my altac job for long enough that I’ve got other collaborative experiences that I can point to in an interview, and plenty of practice in working collaboratively under my belt. But back when I was fresh from the PhD, and looking for a job without a whole lot of experience? Being Dayanara, and being able to point (if only to myself) to my ability to collaborate with others to get things done, would have gone a long way toward making me feel like I had the skills I needed to succeed in a non-professorial job. And, as a nice bonus, the work I do wrangling faculty and getting multi-partnered initiatives off the ground makes me better at RPGing. I don’t have any plans to stop turning into Dayanara when the clock strikes five, and it’s nice to know that she and I are good for each other.

4 thoughts on “I Am Dayanara: Skill Building Through Role-Playing Games”