Less than two weeks ago, I was at a conference about Canadian women and/as public intellectuals. On the first of a series of moderated public panel discussions Christl Verduyn interviewed Dionne Brand, Mary Eberts, and Janice Stein. In the question and answer session I asked the panelists about risk. Specifically, I asked them to think with we, the audience, about the ways in which risk is inherent to a woman speaking in public. For context, I cited #GamerGate–specifically feminist gamer and media critic Anita Sarkeesian‘s then-recent cancellation of her public talk at the University of Utah after threats of violence…and the police’s response that guns are allowed on campus if the carrier has a legal permit. I also referenced a less widely known event: an article published on Hairpin by Canadian writer Emma Healey in which the author carefully thinks through her own experience of a relationship that proceeded despite unequal relations of power and was, for her, damaging and abusive. In both cases the women continue to receive varying degrees of public backlash for speaking publicly, albeit about substantially different issues. The connecting thread, for me, is that they are women taking up public space.

The panelists took up my question in turn. Janice Stein spoke about the threats she has received over her career and told the audience that she tries to keep them from her family so that they don’t worry about her. Ultimately, though, Stein’s advice was to keep speaking and ignore the threats. Dionne Brand spoke about some of the ways in which speaking publicly as a woman, and as a woman of colour, are always-already risky. And yet, said Brand, I have to do it. Not speaking would be worse than any public backlash, she told the audience. Mary Eberts responded last, and she said this: women can speak about almost anything in public and survive the backlash. In some cases, they can even use the public backlash to underscore the points they are trying to make. However–and this was the big however–Eberts then paused–there is one thing no woman can speak publicly about without fear of fundamental and ongoing reprisal and that, said Eberts, is sexual abuse. No one else responded after that, and we moved on to the next set of questions.

I have found myself thinking about Mary Eberts’s statement repeatedly in the last week and a half. Since yesterday, since the CBC announced that it was severing its relationship with Q host Jian Ghomeshi, and since Ghomeshi’s own public Facebook post, I find myself with Eberts’s words on a loop in my head. Let me be clear: I don’t know what happened between Ghomeshi and his partners.  I don’t know what went on behind closed doors. Lawyers for both sides have apparently been discussing allegations of abuse–by four women who allege varying degrees of non-consensual abuse, by Ghomeshi for defamation of character — but I wasn’t privy to those conversations. None of us were.   What I do know is this: women are statistically less likely to speak out about abuse. Women are more likely to trivialize their experiences. Women are more likely to use backchannels (emailing, using social media, talking) to alert one another to potentially harmful situations or to circulate stories of inequity. What I do know is that every day Mary Eberts’s words are given more evidence.

But that’s not all I know. I also know a thing or two about close reading and critical thinking. I know that recognizing, addressing, and changing longstanding systemic issues takes time, and that in a hyper-mediated world slow thinking–slow academe–is not something that is particulary valued. It is, however, something that is necessary. Take, for example, Ghomeshi’s Facebook status update. Reading it purely as someone trained as an academic (I am 50% of the Star’s strange, yet predictable qualifications for the women’s credibility: they are described as “educated and employed”) what I see it this: smart placement, smart rhetorical crafting. First, placement: Among other things, Facebook functions as a kind of faux-intimate confessional. As Chelsea Rooney wrote on Twitter:

In terms of rhetorical craft, the person who speaks publicly first sets the terms of the debate, or so it would seem. Ghomeshi’s post makes the issue about sexual preference and desire that falls outside the restrictive parameters of traditional heteronormative relations, whatever those are. I could go on, but the point, for this post, is not to close read this event. Rather, I’m interested in opening a discussion about how to sustain slow, deliberate, and public thinking about issues of misogyny, rape culture, and asymmetrical power relations in the face of the rapid-fire pace of social media. I’ve written elsewhere that I fear that restorative justice and social media are incompatible. I want to return to that thought here, by way of opening up conversation. How are we–by which I mean (for the purposes of readers of this blog) women working in the Canadian academic sphere–working to sustain slow thinking about these pressing issues in a public way. “Public” here is key, I think. Publicness is not a failsafe, often for women it is the opposite, but it does keep attention on a topic maybe–just maybe–long enough to shake the systemic conditions that sustain inequity.

I don’t know how to draw this to a conclusion, because having the final word is the last thing I want or feel prepared to do. Rather, I will leave you with this cartoon my colleague Xtine sent. The original posting is here: 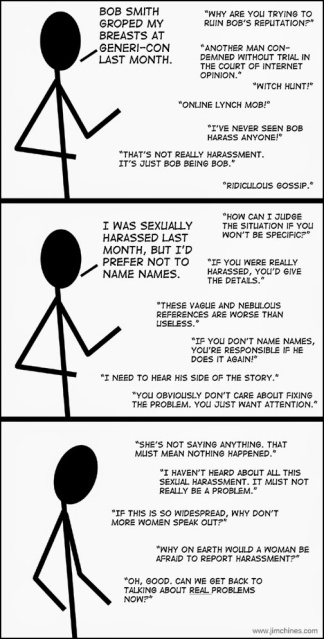