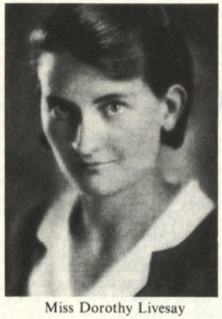 To read of other women’s lives, especially in their own voices, is to be given a fuller understanding of ourselves. It is to participate in a community of women writers and readers that generates a different kind of confidence than is permitted to women’s voices in patriarchal culture.

I am browsing in a bookstore with some friends. One of them pulls a book of poetry from the shelf and tells us about it: “This poet is amazing, but no one talks about her. Dorothy Livesay called her the strongest poet of her generation.” His tone is one of admiration and regret. A man I have just met hears this and scoffs: “Dorothy Livesay.”

I turn sharply. “Did you just scoff at the name Dorothy Livesay?” There is a definite edge to my voice.

He responds with something like: “Dorothy Livesay recommending a poet is like John Travolta naming the year’s best movie.” I have no idea what he means by this, but it is clear he doesn’t consider John Travolta a brilliant cinematic critic. I don’t back down, glaring at him until he expresses surprise that someone would get offended over Dorothy Livesay.

I exit the conversation.

For those not familiar with her, Dorothy Livesay is one of the big names in Canadian poetry. Her writing career spanned seven decades, but she was also a critic, social worker, activist, journalist, teacher, wife, daughter, and mother. I came to her work through Right Hand Left Hand, her documentary/memoir of the 1930s.

The bookstore exchange comes at a time when Livesay and I are at a crossroads. I worked closely on Right Hand Left Hand for a year, and though I deeply admired Livesay, I began to conflate her with all the frustrations and self-doubt of that time. Now, after an eight-month break, I have the chance to continue my work on Livesay–and I am afraid this work will recall my personal stresses. But I am realizing, in this bookstore, how much I care about her. If young male academics can scoff at her name, then obviously its time for a reminder of how much she accomplished

On a more personal level, this confrontation is revealing something about myself. I don’t do confrontation. I don’t challenge strange men in bookstores to explain themselves. But I should; in my daydream revisions of past experiences, I say biting, intelligent things and force the offending person to reconsider. If Livesay inspires me to be that kind of person, then I need her more than she needs me.

Months have past, and I am diving deeper into my work on Right Hand Left Hand. I check out a copy of Livesay’s second book of poetry, Signpost, and when I open it, I gasp. There, on the first page, is a signed note from Livesay to her future husband:


Signpost is a book of Livesay’s more lyrical poetry, but by 1936 she was doubting this kind of work. The political and economic realities of the Great Depression demanded, in Livesay’s eyes, a more relevant kind of poetry, exemplified in her 1936 poem “Day and Night.” Livesay had recently moved to Vancouver, where she worked as a social worker and as regional editor of the leftist magazine New Frontier. She was writing poetry about the escalating Spanish Civil War, and articles covering strikes in rural BC and Alberta. The next year, Livesay married Macnair and lost her career in social work–forced out by regulations that prohibited married women from holding jobs.

I have read pages of Livesay’s adolescent diary, seen a picture of her topless, and examined her archives from top to bottom, but this dedication feels different. It feels so intimate, and yet so situated in all these political and cultural contexts. It is a still moment in the life of a woman who was always consciously growing and changing, but it is marked with her past and future endeavours, as if her identity was never stable, even for a few words.

Joan Coldwell’s words strike me to the core. I am beginning to recognize my work on Livesay as work on myself. I am striving to be that kind of dynamic person who cannot be contained–not in a quick note to a new lover, and definitely not in a scoff.