I want to write something about being a university administrator in an time when the ills of the university are being blamed, almost solely, on the bloatedness and the bad decision making of the administrative ranks. I can’t, just yet. I haven’t figured out how to write it in a way that accurately reflects the inherent contradiction of simultaneously being a graduate student, one critical of the administration, and one of the very administrators of which I have so long been critical. I also haven’t figured out how to write about that contradiction in a way that doesn’t make me feel like I’m risking my professional stability and credibility. So instead, I’m writing about pets. Give me time.

Collectively, the ladies of Hook and Eye have quite the menagerie of furry companions. Erin has her two gorgeous rescue pups, Felix and Marley. Aimee shares her lap with a cat named Lulu and a whippet named Buddy. Boyda has sweet marmalade Theo. And I have this handsome guy. His name, for reasons of size, sweetness, shyness, and my partner’s unaccountable love of terrible teenage dance movies, is Moose. 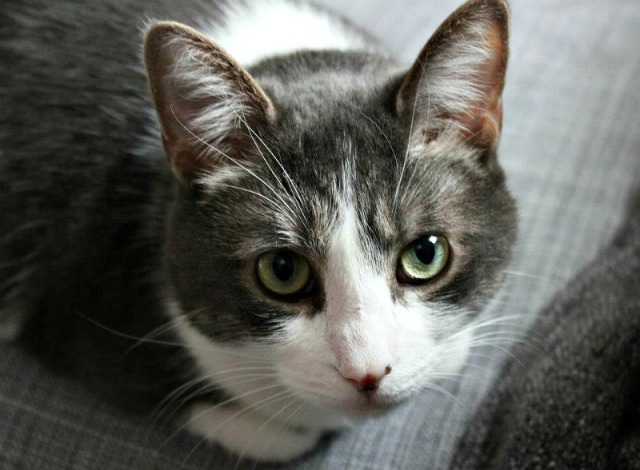 I didn’t think I wanted a cat. When we rescued Moose just more than a year ago, the deal was that I’d get a Greyhound rescue and my partner Alex would get a cat. As we waited for the Greyhound organization we had chosen to schedule a pickup run to an American racetrack, we went looking for a feline friend. I don’t know what it was about Moose’s adoption listing, but it caught me despite (or perhaps because of) its open acknowledgement of his shyness and anxiety. We went to visit the home where Moose had been fostered for the last year, for a whole year after being abandoned, and didn’t get to meet him. He wouldn’t come out from under the sofa. And yet I still knew he was the one for us. His foster mother dropped him off, on trial, and then we didn’t see him for a month. I still don’t know where he was hiding. But one day he decided to relocate to the office, amidst my binders of comp notes. He soon decided that the sofa was his spot. And then the living room armchair. And then our laps. A year later he’s friendly to strangers, chatty and cuddly, and absolutely essential to my mental health.

One of the first things I said about Moose after we got him, and after he decided that it was safe to come out of hiding, was that I wished I had known I was a cat person before I started my PhD. On those days when I studied or wrote alone (and there were lots of them), having him around could have made a world of difference to my working days. It certainly does now. Between a full-time job, a dissertation, a handful of other ongoing academic projects, and a couple of blogging gigs, I spend a good number of my evenings and long stretches of my weekends glued to the computer. I used to get more frustrated with that, more resentful, than I do now. I used to be less productive, or at least less painlessly productive. And Moose has lots to do with that. Instead of being greeted by a glaring to-do list when I get home, I’m greeted by the thud-thud-thud-thud of Moose running down the stairs to say his very vocal hellos. I never have to eat dinner alone, because the Mooster is usually crouched over his kibble bowl just outside the dining room. And when it comes to starting work and sticking with it, I don’t usually have a choice. Moose likes to herd people, and so he herds me up to my computer and then he sits on me. It’s hard to argue with being forced to sit and work–and even harder to get up and do something else, like raid the fridge for no good reason–when the creature doing the forcing is twelve pounds of adorable fuzz who is soundly asleep and dreaming of mice.

Having Moose around has been good for me in all sorts of other ways. I’m oodles calmer, and regularly suffused with all of those lovely purring- and fur-stroking-induced endorphins. I’m less prone to anxiety. I’m never lonely when I’m at home alone, which I was sometimes prone to being. I’m less focused on myself because I have no choice but to focus on what this tiny and totally dependent creature needs of me. I am, in a word, happier–and that has done wonders for all aspects of my life, academic and otherwise. There is very much something to be said for the unconditional love and support of a furry friend or two, particularly when the going gets rough. We live in a pet-obsessed culture, where our Facebook feeds are filled with children reading to shelter cats, with grouchy felines, with toddlers and puppies taking daily naps together, and with our friends (guilty!) posting snapshots of their cuddly companions. This does not surprise me. Just as fashion tends to favour flowing fabrics and florals during times of economic and political instability, social media favours photos of felines. Animals, even just on social media, make many of us feel better. Erin and her colleagues on the picket lines in New Brunswick certainly know this, as their Mafa Picket Lines Pets tumblr attests. It’s no surprise that some of the smartest and most effective women I know share their lives with animals. They’re smart and effective because they do, and they do because they’re smart.

What about you, dear readers? Do you have furry friends, and what part do they play in supporting your mental health and happiness?