The desktop dictionary* on my Mac defines sabbatical as “a period of paid leave granted to a college teacher for study or travel, traditionally every seventh year: she’s away on sabbatical.” That’s nice they used a lady professor for their example, but isn’t it funny, the idea–the very definition!–that a sabbatical is for study or for travel? I absorbed through my thin academic skin very early that the sabbatical is the time that FEVERISH WRITING FOR PUBLICATION happens. If those professors on sabbaticals were often spotted in flip-flops and muumuus wandering dazed through the ValuMart, it wasn’t because they were just back from (an exploratory trip to an archive in) Hawaii, but rather that they didn’t have time to shower, so frantic were their intellectual labours. Study! Travel! Isn’t it really all about “getting the book finished and out to the publisher,” or “slamming all those research notes into several articles, pronto”?

And I like the leadoff phrase: “a period of paid leave,” again, as though one is absent from ‘work’ and getting paid for it. But that’s not quite right, is it? Usually, a sabbatical involves a pay reduction and a replacement of teaching work with other work.

So my definition, if I were to rewrite this, would be: “sabbatical (noun): a period free from teaching or internal service obligations, at reduced salary, granted to a college teacher to generate publishable research, traditionally for 12 months after six years of teaching, or for 6 months after three years of teaching.”

Still. A sabbatical is a pretty sweet thing, a shift in the routine, a break from what can sometimes feel like an unceasing hamster wheel of prep / teach / grade / meetings / more meetings / email / rinse / repeat. I’m on sabbatical, as of January 1st, and until June 30th.

You know what? On my last half-sabbatical, I actually did go to Hawaii (International Auto/Biography Association biennial conference, can I get a what-what?!), but it seems funnier to both acknowledge it here and leave it in the text above. It struck me at the time as funny enough that I took this photo on the beach at Waikiki: 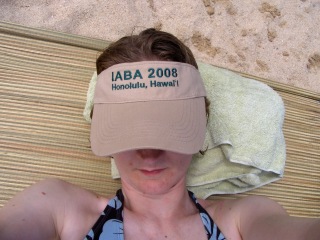 Everyone here was back in class, as of 8:30 Tuesday morning. I’m in … limbo. I’m wearing my writing clothes, but since my daughter is still on Christmas vacation until Monday of next week, I’m doing the stay-at-home mom thing until then. Which is a kind of neither/nor situation. It was jarring, driving to campus to pick up my husband after work on Tuesday, and to suddenly realize, hey, it’s on, and I’m not in it. But I’m not yet out of it either, in that all-research-all-the-time zone that the sabbatical is supposed to foster. Next week.

During my last sabbatical, my husband and I were forced from our home by condo developers, selling and buying in a frantic sort of way. He was between jobs. Then we moved, right when he was starting a new job. Two new jobs, actually. Our daughter was about a year-and-a-half old, in that first year of catch-absolutely-everything germiness at daycare. She got pneumonia. I got four sinus infections, and was pretty sure my eardrums were going to explode on one research trip that involved flying to California with three hops along the way. I gripped my armrests and howled silently, willing my ears to stay intact, and wondering how I could talk to my real estate agent on the phone if I was deaf. I was terrified about everything: my house situation, our jobs situation (would I get tenure? would hubby get established in his new career?), my daughter in daycare, being sick sick sick for months on end, moving, all of it.

So I guess my Pavlovian reaction to thinking about the sabbatical is this: panic.

What does a sabbatical mean now, now that I have tenure, and a research grant, never mind a stable housing situation and everyone in much better health?

What can drive me forward now, if not the panic of the last sabbatical, of the whole pre-tenure time generally? What do I want to do: to think about, to write, to read?

So far, I have no commitments. I want to find out what I can get done, when I’m at liberty to do it, but not driven by the lashings of someone else’s (book, conference, public talk) deadline snapping me in the ass.

And of course, I both welcome and solicit any advice or stories about sabbaticals that you can share.

———
* it’s funny to me to start out this essay like so many of our undergrads do, by recourse to the dictionary. It’s funny because, I suspect, I’m not teaching this semester and so won’t have to read any of those essays … does the sabbatical then have it’s own special brand of humour? I’ll keep you posted, dear readers.